Recently, my friend Maciej Żywioł came to London and we decided quite spontaneously to go take pictures in Canary Wharf. All pictures in this article have been taken by Maciej.

I know the setting below is quite reminiscent of Hamlet’s character Ophelia, my “nicknamesake” if I might say so.

However, Ophelia is asleep here, she’s dreaming next to the Koi fish and among other animals, a spider – my beloved spiderhug ring from Rogue And Wolf. 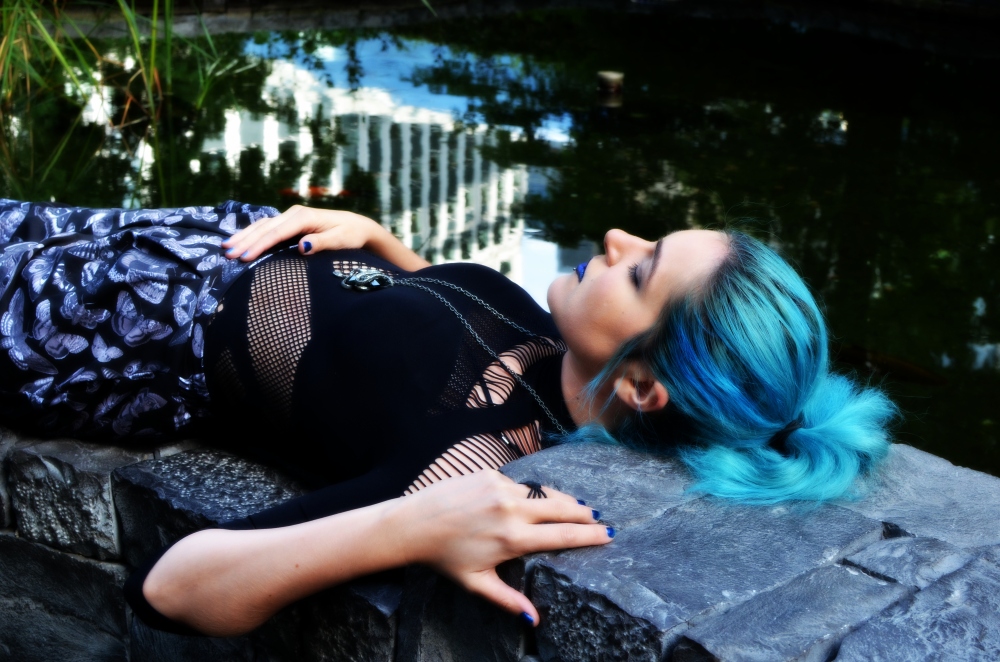 I googled Ophelia’s Dreams and found out two great things.

Then, a series of photographs by Viet Ha Tran called Dreams of Ophelia:

As reality plays hide-and-seek with fantasy, the images reflect volatile moods recaptured from a permanent state of change.

Actually, the character I really want to reference in this article is not Ophelia, it is Sarai from Laini Taylor’s amazing book Strange the Dreamer. The last book of the series, The Muse of Nightmare, will be out soon.

They would say she hadn’t shed blood but wept it. That she was lewd, tonguing her teeth at them, upside down and dying, that she vomited a serpent that turned to smoke when it hit the ground. They would say a flock of moths had come, frantic, and tried to lift her away.

I guess I was dreaming since I was wearing a snake pendant from Alchemy Gothic, the same one I wore in the Good Slytherin article.

The moths, however, are real. The very comfy and stylish trousers are from BlackMilk clothing. I styled them with a bodysuit from BlackMilk as well and boots by Aldo.

Sarai, one of the main characters, is a blue-skinned girl, the daughter of a goddess. With her siblings, she lives hidden in a citadel floating over the City of Weep.

Her power resides in invading and manipulating people’s dreams. Her sister asks her to turn the city’s inhabitants dreams into nightmares, for a reason you will discover if you read this book, and the way Sarai reaches out is through moths.

So it was quite fortuitous than on our way back to the Tube Maciej and I discussed the topic of dreams and what they might mean. It is quite meta, but as a child, one of my dreams was to be able to capture dreams in videos, so they could be replayed. There are some articles about the current research.

While some people may dream about places they know, I most often create my own urban landscapes in dreams, even when they are supposed to be a place I know like Paris or London. London does look like my dream architectures sometimes, as everything looks different or random as soon as you cross a street or turn around a corner. The way I see it, elements are picked subtly randomly out of things I care about, like Markov Chains.

I would also try to use fantasies as a way to help me with some fears, like trying to dream I was a mermaid to help with my fear of swimming. I am actually learning these days… Or dream I was a snake goddess for similar reasons, which might explain a few elements in the pictures.

I really like moths and butterflies, and there will be more insects in the next two articles, with pictures also taken by Maciej Żywioł.